This female pheasant was spotted on the reserve on the 31 May, its a white bird – not albino ( as can be seen but its normal coloured iris). These birds are believed to be “genetic throwbacks” – although some folk believe they are “marker” birds used by gamekeepers to locate flocks. The bird was covering 2 chicks before I inadvertently disturbed  it.  My initial view was that it had done well to survive to breed, but then again given its size  its only likely to be predated by a fox! 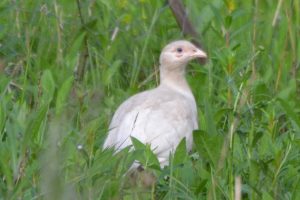