A new year and and a resolution to post news more frequently!

Very few birds on the reserve, today, we had hoped for some winter thrushes but with few hawthorn berries it was perhaps no surprise.  However what we lacked in quantity we made with quality.  Checking out the effectiveness of some of the glade creation we did about 4yrs ago I flushed out a woodcock from the woods. The bird flew fast and silent out of the trees in a NE direction.  BRGP isn’t a site you would anticipate seeing a woodcock, but this small woodland is reasonably wet and there are other woods in the vicinity. Our native birds are also joined by large numbers from Russia and Finland so increasing the odds of disturbing a bird.  I believe this is a first for the reserve!

We were delighted for our first view of little egret for the year. The bird was initially 200 m distant at first – in the vicinity of the small beck that runs into the river about half way along the reserve. Fortunately for us it was disturbed by 1 of 3 red kites which kept harassing it for about 5 minutes drawing it until eventually flew along the river.  I mentioned the sighting to a dog walker, who visits the reserve  frequently – usually in the evening. He remarked that he had seen the egret roosting in a tree over the lagoon on a few occasions- something I will definitely follow up in particularly when the evenings start getting a bit lighter

Sand martins now number over 50, the best we have had for many years.  The blackcaps and chiff chaffs have now been joined by willow warblers. With the river being so low the gravels and muddy banks have attracted a pair of redshank and a pair of common sandpiper. A female sparrowhawk was around I assume targeting the blue, great and long tailed tits and dunnocks ,, since we don’t have any sparrows!  A young duckling was calling from the top of the bank between  the river and pond, hopefully it was located by its mother before being spotted by the sparrowhawk.   Steve

35 plus sand martins pairing up and exploring nest holes were the highlight of our saturday work group. Other birds included singing blackcap and chiffchaff and pair of kingfishers. A  newly emerged orange tip was joined by over wintering  brimstone, comma, peacock and small copper butterflies

Visit to the reserve by 2nd Ilkley Guides

We welcome Bradford Botany Group on Wednesday 26 July at 6.45pm 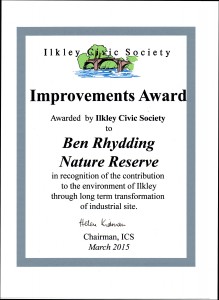 to Ilkley Civic Society for presenting us with this award

Our rescheduled February work group took place on 21 February, Our main focus was soil sampling with Steve Peel. We took soil core samples across a range of different habitats. Analysis of these samples we will give us a  better idea of the suitability these areas for introduction  of more native species either through seeds or plants.

We also spent time building up the dead hedge by the entrance fence, clearing the paths of bramble, hawthorn and willow and lastly restoring the area that has been damaged by bottle diggers.   It’s very frustrating to see the damage that has been done in area that’s very important for our colony of rare White-letter Hairstreak butterflies.

Following some good records in 2014 we have had regular sightings of 2 little egrets on the river and opposite bank  since the beginning of February – who knows may be they could be back and breeding in Wharefdale for the fist time in a very long time.  With sightings of pairs of goosander, dipper and oystecatcher spring is here!

Photo by Mark Hockey from a previous year